New Castle, New Hampshire, founded in 1623, is picturesque with its historic buildings and miles of coastline. In fact, everywhere you turn is coastline, because New Castle is the only town in New Hampshire comprised entirely of islands spanning 500 acres. While the town itself is not comprised of a lot of distance, it is true to form when you say “good things come in small packages.”

One of the most treasured 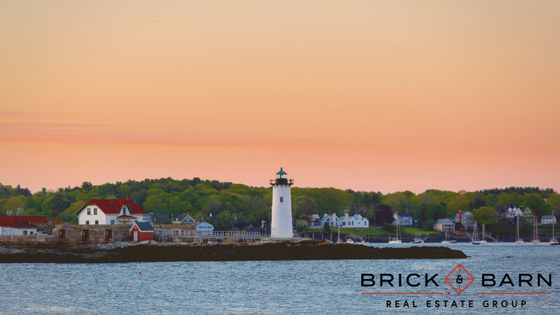 of the attractions in New Castle is Great Island Common. When you ask the locals about their favorite summer memories, you will inevitably hear about an experience here. Comprised of 32 acres of seaside greenspace and beach, the Common is open to the public 365 days a year from 9 AM to 9 PM. The summer is vibrant with weddings in the Pavilion and families bringing their children to play on the playground. Owned and operated by the Town of New Castle, this beautiful waterfront space is one of the more popular places on the Seacoast for relaxing near the water.

New Castle is home to two state parks - Fort Stark and Fort Constitution. The Fort Stark State Historic Site is located on a peninsula, historically known as Jerry’s Point, at the south-east corner of New Castle Island. Fort Stark was named in honor of John Stark, a commander of New Hampshire forces at the Battle of Bennington in 1777. A seasonal park, Fort Stark opens its gates from Memorial Day to Columbus Day. Venture to the northeast corner of the island you will find Fort Constitution, formerly known as Fort William and Mary. Located on the grounds of the US Coast Guard station for Portsmouth Harbor, special care must be paid when visiting this site. In order to reach the fort, you must walk along the blue line that begins at the entrance of the base. Visitors are required to stay on this blue line because the grounds are an active military base that has civilian restricted areas. Fun fact: Fort Constitution is the only park in the country that requires entrance through an active military base.

The Coast Guard Station got its start on May 4, 1882, when Congress authorized a Life-Saving Station to be built at the mouth of Portsmouth Harbor. The Jerry’s Point Station was completed in 1888. The station has a rich history of keeping a watchful eye on the Portsmouth Harbor waterway. The Jerry’s Point Station was turned over to the War Department in 1908 when a new station was built on Wood Island. The Wood Island station was in service until 1942 when the station was moved to its current home in New Castle. The current building visitors frequent today was dedicated in 1967. The mission remains search and rescue and homeland security.

Take a step back in time and enjoy the grandeur of an era past when you visit Wentworth-by-the-Sea. The 161 guest room hotel boasts resort-style amenities, including a full-service spa, with all the historic charm of the 19th century. Built in 1874, Wentworth-by-the-Sea is a premier destination for meetings, events, and romantic getaways.